So after a couple of years worth of hype, Avengers: Age of Ultron has finally come out and everyone who does not live under a rock has already seen it about three times (I know I have). All of us who are in the same boat, welcome. If you are one of those poor unfortunate souls who has not had a chance to watch it, but is planning to, I warn that this post contains spoilers. If you don’t give a damn either way, then fine by me.

When big movies come out, usually big thoughts come out of it. Some concerning the subjects touched on by the plot, others concerning the creative film-making behind it, sometimes it’s the behind the scenes drama, and other times it’s all about the characters. With a film like this one it’s inevitable that hundreds of conversations dissecting everything to do with it will emerge, even more so when it’s another link in a franchise, where certain targets are expected to be met.

In Age of Ultron’s case, the biggest conversations to have popped up are concerning Scarlett Johansson’s Black Widow. Even before the film came out there was some drama over Jeremy Renner jokingly calling her character a “slut” for allegedly having slept with four of the six male Avengers. And while that is a whole other conversation entirely, I would like to put in my two cents on the other big issue being debated: How feminist was Black Widow’s character written as?

Who’s the man behind the story? 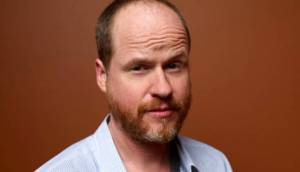 Joss Whedon is the man behind both Avengers’ scripts, he has been crowned as a feminist by some, and others claim he is a false and overrated idol. In any case, Feminism is still a work in process, both in the actual definition of the word and what it implies for you to do/be as an individual. Anyone with a big a power on society (cultural power, anyways) as Whedon is someone who will be judged mercilessly.  However it’s always important to remember that he is human, he is a man, and he is doing his best even against bigger powers like Disney, Marvel, and television companies.

There’s this scene, Natasha and Banner are having a conversation where they talk about running away and maybe living a happy Avenger-free life. Bruce claims that there is little that he can give her, making hand gestures at the Barton’s home, and some toys in the background, openly saying he could never give her the domestic life he assumes she wants out of him. The claim ends with him concluding how much of a monster he is, to which Natasha answers that she is in a similar situation because she can’t bear children either. 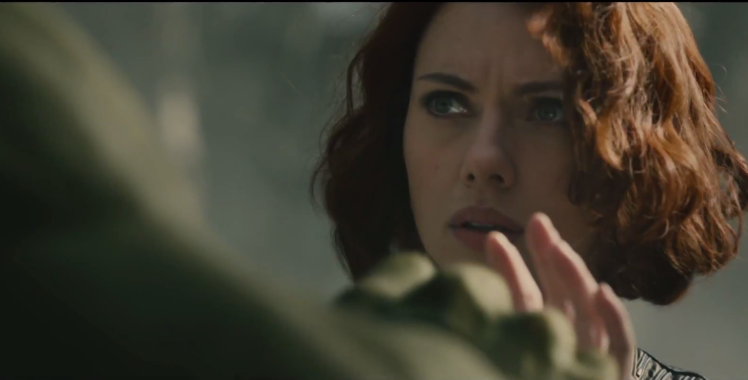 At first, like the rest of female society, I was pissed off too. Really? Black Widow sees herself as a monster because she can never get pregnant, really? I was more than ready to hate on this idea, it seemed like a poorly written story by someone who clearly does not understand women. A cliche, of all things, lazily written off to avoid further exploration of the plethora of complex women that can be created for film and superhero movies. But I vented a bit, read a couple of other people’s complaints about it, and let it lie. Eventually my train of thought transitioned from anger, to annoyance, to a shrug.

Like I mentioned above, feminism is still a word in process of being specifically defined. There is no one definition and every couple of days we are finding holes in them that we are taking the time to fix and explain. So while everybody’s got a different idea of what their strong female character should be, I think we’ve been unfair with Black Widow.

The scene I described above happens as consequence of Scarlett Witch’s meddling with the Avenger’s minds, everyone is suddenly broken down to meditate on the big theme of this film which is “home”. Steve Rogers (Captain America) is faced with the idea of never going home because war is never over. Thor is confronted with the realization that he could ultimately be the destroyer of his home because he is not as worthy as he thinks. Tony Stark (Iron Man) is previously tortured with a similar idea where his narcissistic nature caused him to destroy his friends and his home.

Natasha is shown snippets of her past that reveal she was sterilized as part of her graduating ceremony into becoming a Black Widow, so if we follow with the general theme we can assume that she sees this as a loss of any sort of home to ever go back to. She has no endgame. We can also assume she has been previously trained and instructed not to get attached to anyone romantically, so what would be left to remove is the idea of motherhood.

Part of the problem is that we don’t really know what went on in Bruce Banner’s mind when Scarlet Witch hexed him. Sure, he could have been very much living his worst fears instead of just dreaming them, but was there anything else we might’ve missed? Could he have had a train of thought where he would one day want to retire to a home, wife and children but Hulk would ultimately destroy it all? Are we as analytic audience members missing anything?

I mean, Banner was the one who opened the idea strictly to domesticity. Natasha just talked about running away. Youtuber ComicBookGirl19 complained that she found it insulting that Banner would even consider that Natasha would want to settle down as a housewife, and she may have a point, but he could also have been thinking selfishly (out of trauma) and opened up to how he could never give anyone domesticity.

If this is the case I can easily see how Natasha would jump in to comfort him with a “hey, me neither, buddy, and I would never ask it of you” sort of line, which makes sense. Being a Black Widow she is always instinctively working to make things go her way by making it seem like it was the other person’s idea. Why would she not apply it here?

There’s a little more we can extract from the scenes in Barton’s barn. The way Natasha seems to have history with Clint’s family is a reflection of another side of her femininity, a side she never shows to anyone. She seems to be close(ish) with Laura, enough that their next child was going to be ‘Natasha’. Their daughter is the first to ask for ‘auntie Nat’, she later brings her a drawing to which Natasha responds by caressing her face. And when told that ‘Natasha’ would be in fact ‘Nathaniel’ she frowns playfully and calls the future son a “traitor”. 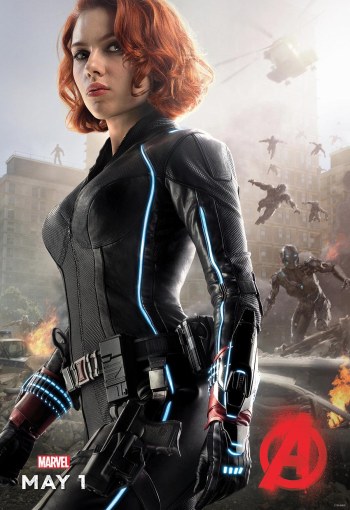 Alyssa Rosenberg has a fantastic article about it and words very well how maybe people are just exaggerating something that they might not agree with: “[…] ultimately that’s a great deal of what I want from my female action heroes: that they not be required to take off their femininity when they suit up for battle, and that they not be required to leave it hanging in the closet when they return from the wars.”.  I agree with the sentiment wholeheartedly, it’s a recent discussion that’s been circling blogs about how we are still struggling with the idea that motherhood and all things pink equal to an undesirable feat.

Mark Ruffalo speaks some truth when he says that part of the problem is the underrepresentation, we have no one else to compare to (on the big screen, anyways) so the one character we get we want to be perfect and defy past cliches: “The guys can do anything, they can have love affairs, they can be weak or strong and nobody raises an eyebrow. But when we do that with a woman, because there are so few storylines for women, we become hyper-critical of every single move that we make because there’s not much else to compare it to.”

This is also a big reason as to why we are being very picky about it, but many people are in denial of this as a factor, too. It’s really hard to be a feminist in a world were we are constantly being raised and surrounded by media still trying to keep the patriarchy at the top. It’s hard to spot what and who is genuinely trying to be a voice in our favor and what fails at it or is a wolf in sheep’s clothing.

In the end, for the female race’s sake, I think the conversation might’ve played out a whole lot better had Natasha talked about it with Laura instead of Banner. She might’ve received advice, alternatives and comfort that Banner in that moment was unable to give.  It might’ve even taken a whole other direction and served to illustrate a little bit more of what’s going on in Natasha’s mind. But we’ll never know. All we can do is work with what we’ve got, and accept that it is not impossible for any woman, super, immortal, deadly or otherwise, to want to be a mother. For whatever reason it may be. It’s in our nature and some of us may want it from the day we know we can bear children, some of us may never want it, and some of us may change our minds.