The term Manic Pixie Dream Girl has a rather conflicting history behind it, but for the sake of my story we’ll use film critic Nathan Rabin’s definition, he did after all coin the term. In his words, a Manic Pixie Dream Girl is “that bubbly, shallow cinematic creature that exists solely in the fevered imaginations of sensitive writer-directors to teach broodingly soulful young men to embrace life and its infinite mysteries and adventures.” With that definition any avid film review reader can see how it’s just harsh criticism towards a writer/filmmaker’s creation and how it’s insulting to female characters all around. However, for some reason society decided this term was not an insult towards misogynist writing, instead a rather obvious label for girls who tend to be quirky and outgoing. Or maybe they were on to something, I don’t really know. All I know is that I grew up knowing this idea of a woman and admiring it highly, without knowing that society’s idea of her sole reason for existing was “to help broody male characters lighten up and enjoy their lives.”

The problem was I hadn’t really heard the term, nor read the review from where it came, nor had noticed it ever being used as the trope that it was. All I had seen was Eternal Sunshine of the Spotless Mind (2004) and I was transfixed with Clementine.

I loved who she was, I loved the way she was, and I wanted to be just like her. The beauty of my first encounter with this kind of woman was that in this film we were given a more realistic approach towards the trope, for while she had a personality that was clearly irresistible to “broodingly soulful young men”, she also showed the rest of the shades that belong to this bubbly personality: anger, frustration, worry, insecurity, self-defense, cruelty. To me she was the opposite of many types of women that had been presented to me by pop-culture as possible options of who to assimilate while growing up. She was bouncy but she was loud, she was colorful and she always spoke her mind, she was desperate for living but she was aggressive, she was sweet but she was also mean. To me, she was as human as any human that I would like to be.

So as I grew up I tried and tried to be just as close a human being as Clementine was, not necessarily mirroring her specific traits, but rather highlighting the ones I already had in myself without having to excuse myself. The hard part was being high-on-life, though, but that’s a story for another post… For now all you need to know is that I came out of my bullied and slightly repressed shell with the help of Clementine. Unbeknownst to me, though, was that while the male half of society was beginning to want 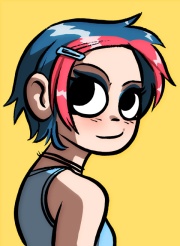 and accept more and more of this Manic Pixie as something clearly desirable among girls, they were expecting them to fulfill their duties of savior. ‘Cause that’s what happened in the movies, right?

For around four years, minus the hair dying (I like my hair color), I lived blissfully with this label that was, unbeknownst to me, the Manic Pixie Dream Girl. And I say unbeknownst because while I was embracing one half of the trope, the chance to “function” as another person’s “savior” hadn’t really crossed my path. Not that I was actively seeking to be that at all, but nobody had gotten close enough to expect it of me or to demand it of me. And then I met this one guy.

I met him at work, and he was a cool guy, angsty at times but it wasn’t a 24/7 sort of deal so I enjoyed his company. For a moment I even considered him a best friend, seeing as we got along very well from the start. We went out and got drunk together, we had movie nights, we hung out together at lunch, etc.

When his angst did flare up I did what any friend would do: I listened, supported him and tried to lift up his spirits and self-esteem. No biggie. By then I had been in a relationship for around a year and I identified solely as gay, so the line was clearly drawn. However this did not stop him from believing he had a chance and the situation had evolved into one of those “men and women can’t be friends” thing. So I drew the line again and again, but the more harshly I drew it, the more difficult the situation became. I slowly began to realize what I was to him and I felt used, I was serving my purpose as support for him and his issues, but I wasn’t feeling supported myself.

I’ve always felt insecure to talk too much or at all about myself, so when having conversations I usually wait to be asked things (unless it’s with the BFFs). In this friendship we did talk of many things, but he rarely inquired about me and my issues. Heck, he never inquired about my relationship either. At first I didn’t mind, but as the months went by, I felt less and less inclined to even start a deep conversation. What made matters worse was how he reacted to me drawing the line and pushing him slightly away. He became too clingy, messaging too often, even trying to “buy me back” with gifts. His definition of being a good friend was based on how many gifts he could give and how he was present in your life.

The tipping point was how he begged using phrases like “you make me a better person”, “I need you”, “you’re the most amazing/wonderful/happy/uplifting person I’ve ever known”, “you’re a light in my shitty life”. This was not normal nor desirable behaviour to me, beyond making me feel good about myself or even light up my self-esteem, it made me feel responsible about a person I met months ago, with whom I had zero commitment and with whom I didn’t feel valued as a person. I truly felt like things where expected of me that I wasn’t entirely sure I was prepared to do, let alone want to do. I didn’t feel like I was a person, I felt unsure of how people saw me and what people would expect of me when they got to know me a little bit. I tried to make it work, I honestly did. I gave in and listened, I asked him to behave, I told him what made me uncomfortable, but after a while he went back to those issues and I felt overwhelmed.

So I cut him off completely.

I got bashed for it, and friends of friends don’t talk to me anymore for doing it. But I did what I needed to for my own well-being and self-preservation, seeing as this friendship was only concerned with one party member’s well-being. It’s what I got out of this friendship, I guess. I learnt to distinguish between when something is good or toxic for me, something we as human beings often go through life without realizing. We believe that being needed equals being cared for or loved, and vice-versa. But these are two different things, and if we can’t see the difference complications will arise to where you will find it hard to see a solution. Or to where it will hurt to apply the solution you know is right. It’s not wrong to worry about yourself, specially when you feel stuck and uncomfortable with someone.

Personally, I think, as human beings who seek love, we all eventually hope find that one person who is willing to save us or guide us towards being better people. However, like all relationships, be it platonic or amorous, this is not something that should be a one way street. Your “savior” is not flawless, running on only one emotion, and always available for only your needs, wether they be emotional, psychological or sexual. This is what I always understood from Eternal Sunshine of the Spotless Mind, I accepted that for love and other relationships to work you put up with the very much real and fully dimensional person that your significant other is, all the while trying your hardest to work together towards being better. Both of you, not just one. You draw your limits, they draw theirs. Because when love is involved, it’s worth it, right? I certainly think so.