I am gay, and I have been gay all my life, just not always actively or openly.  But coming out is complicated because like it or not you have three levels to come out to: yourself, your friends and family, and society. Most of the time it’s not enough to comply with this checklist, the process isn’t done that one time you finish telling everyone you know and interact with that you are in fact gay. It can be a repetitive process where you are constantly reaffirming to yourself, your friends, your parents, and society that you are in fact 100%, bona-fide, legit gay and no amount of experimenting, talking about, considering, examining, falling in and out of love will change that.

But trust me, once you cross that bridge, oh the happiness and freedom that engulfs your everyday is the second best thing in the world (the first is traveling). So as I mentioned above, it’s a three level-like process, and while I did go through this process I didn’t exactly swing open the closet door and walk out singing “I feel pretty, and witty, and gaaaaay!”. I more or less opened the door, stood inside for a while, put one foot out, then the other, then my arms and I sort of waddled my way out of the closet. So here is my long story.

Coming out to myself:

It was long, and it was painful. It was hard because the society/environment I grew up in never encouraged or showed you any form of love, attraction or sexuality other than the heterosexual. Not that they ever bashed against gays, but their existence was not something I was aware or familiar with.

Ironically though, the Catholic school I attended for eleven years never said a word against homosexuality (although they did condemn Pokemon, Yu-Gi-Oh, and Halloween… which confused me plenty), so when their presence appeared I never really thought badly of it. I remember when I first heard of a man loving a man it was the weirdest thing to me, it didn’t make sense, but I tried to understand it.

The way I’d reason liking girls in grade school was by justifying that “as an artful person there is nothing wrong in appreciating the female body for all gorgeousness that it is, as both the male and the female body are beautiful”.

This was my mantra for almost three years and it was the way my eleven to fourteen-year-old-self would give herself permission to keep staring at that girl she saw as being very beautiful. But still wrapped up in a heterosexual-only world I went along with the idea that my next “growing up” step would be to have a boyfriend, so after my boy best friend’s third attempt to become boyfriend and girlfriend I obliged. I never pursued anything above or beyond holding hands, and being the nice boy that he was he never pressured me into anything. But after 8 months of having nothing but a title I decided to call it quits, much to his dismay. I was really sad about having made him sad about it, and I think my friends might’ve misunderstood it with missing HIM instead of missing out friendship. And I just couldn’t explain to them that I didn’t really miss the “relationship”.

By high school my for-art’s-sake-mantra wasn’t enough, and I would rock myself to sleep just praying (to no one in particular, honestly) that my chance to kiss a girl would come soon. To be sure, wishing it is never enough, and being sexually shy and busy with the IB program in high school didn’t help. But by then I had actually admitted to myself that maybe I liked girls a little more than just for the “art’s sake”. My true I-might-want-something-more-than-friendship crushes developed during my high school years, but I never did anything beyond swoon over girls. Even though I did have a chance to maybe kiss a couple of girls (one close friend in particular), I never did out of fear of the possibility of alienating myself from them.

As graduation neared I still hadn’t completely given up on boys, and I was suspecting that I might be bisexual. I mean I had never really had a bad

experience with a boy, but I had never truly desired a boy or felt anything beyond “he seems cute/attractive”. So eventually I became yet another boy best friend’s girlfriend, and he too was also a nice boy. But this one actually wanted kisses and maybe some touching, all of which just made me so goddamn anxious. I remember that if he ever asked for a kiss I just wished he wouldn’t, I felt I had to push myself to try and comply with his feelings. So after the fifth month I stopped trying and bid him au revoir. After graduation I spent a year being pursued by a couple boys and one girl, but I never really solidified anything with anyone. I was in my I-don’t-want-a-relationship-because-I-don’t-believe-in-love phase (hey, it was a phase for me, it can be more than that for some), but for all I knew I still considered myself bisexual. 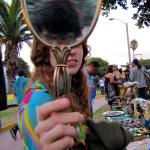 In the summer of 2011 I met a girl I liked instantly, and with her I finally realized what I want and what I definitely don’t want. It was a strange realization, but it made me extremely happy. I was just so ecstatic that I didn’t need to force anything and that it all flowed so naturally. It was such a contrast to what I had experienced before. My love, my desires, my preferences, they were all just there and I didn’t have to think twice if it was right for me.

But wait, that was not the end of the journey!

Coming out to my family and friends:

As I mentioned, fireworks did not go off inside me to announce that yes I was 100% gay, and I wasn’t initially concerned with identifying as anything. My label free and idealist point of view on life and sexuality didn’t really push me to over-examine myself and give myself a flag to wave.

To my friends I felt nervous to announce I was dating a girl, I still can’t pin-point why, we’ve been friends since high school and we have always been pro-humanity, and yet I hesitated. With best friends number one and two I let them know that I met someone I was crazy about but didn’t reveal it was a girl until a little later. They never really pressured me into labeling myself, they just took it as fact that I was dating a girl.

To my parents… well I didn’t really have much of a choice, and it was my fault. One night I went out and didn’t come home (I blacked out at a party and my ex-then-girlfriend took me to her home), and after my parents panicked, called everyone and finally found me and picked me up they had mostly put the pieces together. By the time I woke up, I went through an interrogation of sorts so that I could let them know exactly what kind of relationship I was having with this girl. Once I confirmed that yes I was dating a girl, it went on to become a conversation to figure out if I was gay or “going through a phase”. So it went something like this: “Are you sure? But you’ve had crushes on boys before… Have you liked other girls before? Are you just experimenting? I know we’ve seen it in movies and TV, but… are you sure you genuinely want to or are you just copying what you see?”

It honestly went so much better than I thought it would, I didn’t know what to expect as a whole and I assumed my father would loathe it. But their questions awoke in me the need to question the roots of my feelings, and boy did it become a roller coaster. For a whole year I went back and forth with myself and debated over and over: Do I really love women? Do I want to be gay or am I? Are men just really not for me at all? At all? Am I following what I want or what somebody else wants of me? Do I need to strictly say that I am something to be it? What if I’m not? What if I’m lying to myself?

Eventually, though, I came to the definite answer: I am gay, I really really am. No, I can never see myself with a man not because I hate men, I just don’t feel comfortable with them. And with time this has been a concept that has become easier and easier to swallow for my family. I can’t say my parents have been cruel or have otherwise tried to straighten me out (see what I did there?), but my mom has had a better time accepting it than my father as he still asks the “are you sure?” bits. My siblings are fine with it now, constantly at the ready to defent me if needed; and my friends, well, they’ve always been fine with whatever I want to be as long as I don’t put myself in danger.

Coming out to society:

I don’t really consider it anyone’s business to know, just like I don’t expect to know people’s religion when I first get to know them, so I don’t pursue explaining my sexuality to anyone. If the conversation goes there of course I’ll acknowledge it, although at times it has led to people making assumptions or start questioning my motives. It’s during these times that I say that you go through coming out again and again, and I’ve had to. But it’s gotten easier and easier to just let those comments slide and not disturb my peace.

I may never be able to be openly gay out of fear of the privileges society can take away from me: an apartment, because the owners dislike gays; a job, because the interviewer or company are just not into my “lifestyle”; a seat in a restaurant, bar, park or even someone’s home because my sexuality is not something they agree with, therefore they do not want to be associated with. But to people I see everyday like co-workers and school friends I feel free to let them know I am gay if they ask.

While I do honestly hope that either my generation or the next won’t have to struggle so much with the process of identifying as anything and being open about it, I would like to hug everyone who has already gone through this long process and endured. I spent so much time telling myself that it’s ok to have all these doubts and questions and struggles, and yet I know that I have had it much easier than so many people who grow up in societal circumstances that keep holding them back from what they want. So for the moment I do what I can in the society I live in: spread the word, share positivity, advise anyone who asks for help and try and convince people to respect.